The Trusts in lockdown

Yesterday marks two weeks since Jacinda Ardern announced that NZ would enter into a lockdown due to the spread of COVID-19. She gave households and businesses two days’ notice to prepare for the unprecedented disruption of level 4 restrictions, including the closure of non-essential businesses.

Adjusting to the new (albeit temporary) normal isn’t easy and some businesses have coped better than others. The Trusts have had more problems than most, so what has gone wrong and how can they improve from here?

No blame can be laid at the feet of the frontline staff who have been serving customers with their usual high standards. Their effort in the context of the situation needs to be applauded, and they deserve our thanks.

The Trusts are currently without a permanent CEO, with Matt Williams (Head of HR) and Marie Weaver (CFO) acting as interim co-CEOs. They’ve been thrust into a situation that would challenge the most experienced of leaders.

As Chair of WATS Ltd, Brian Corban should have been providing them with a lot of support given the current circumstance. The Presidents (Linda Cooper, Pam Nuttall) should also have stepped up to provide strategic direction and effective decision-making. Pam is relatively new to the role (and The Trusts), but Linda has been President for ten years and an elected member for almost 20 years. The current situation reflects poorly primarily on Linda and Brian.

As soon as The Trusts knew they would be operating during lockdown, their goal should have become to satisfy demand whilst minimising risk to their staff, customers and the wider community.

Minimising risk doesn’t just mean providing a safe in-store experience for customers and staff. It also means reducing incentives for people to travel to West Auckland and for people to leave West Auckland. The Trusts have done well on the first part (the safe in-store experience), but the second has been an abject failure. There were a number of very poor decisions to blame.

The Trusts’ attempt to establish a temporary click and collect mode of operation were a total disaster. Phone lines were overwhelmed, credit card details weren’t protected, large queues formed, people were left empty handed and the product list was ridiculed. In short, it was a train smash.

Click and collect was an admirable goal, but obviously not realistic in the timeframe or with the resources available. This was compounded by trying to muddle their way through using in-house solutions (payment gateway anyone?). 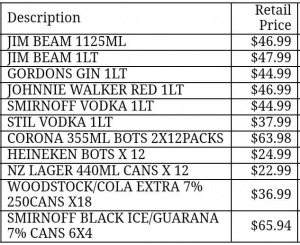 Once it became clear that West Auckland’s liquor stores would be the only place to buy spirits and RTDs, it was also immediately obvious that ‘out of towners’ would travel west to buy their supplies. Calls from the public (and us) for The Trusts to align their range with the supermarkets were ignored or written off as ‘anti-trust rhetoric’. This from Linda Cooper when asked about selling spirits: “I’m sure any of your group who don’t want the Trusts to exist will always find the negative but there will be many of our customers who will be very happy”.

The Trusts finally announced on Saturday 4 April that they’d stop selling spirits and RTDs. They estimated that 25% of customers were out of towners, which means something like 4,000 out of towners shopped at a West Liquor store over the week.

Why didn’t they limit their range earlier? Part Linda’s stubbornness and part profit seeking. Spirits and RTDs have higher profit margins than mainstream beer so customers switching from Vodka Cruisers to Heineken means less profit for The Trusts. It’s an ugly trade-off for them to have made when the risks were blindingly obvious.

The Trusts have been operating nine stores (now ten) for five hours a day, six days a week. It’s not enough to meet demand.

Even at one customer per minute (which is optimistic), ten stores will serve 18,000 customers each week. But West Auckland has 85,000 households (and over 280,000 people). Simple logic tells us that there aren’t enough stores open and there are too many customers for the hours they are operating. People opting to shop online and those who stockpiled will help, but that won’t be enough to stop large queues forming.

Presumably, the critical constraint is staff. But with all their hospitality venues closed, and only about one third of their retail stores opening, it’s hard to understand why they can’t do better. Even with five staff working at each store, that’s only about 50 full-time equivalents – whereas The Trusts have about 350 employees (a mix of full and part-time).

It’s important that The Trusts look after their staff, but they also need to service the demand in West Auckland. Excessive queues and short operating hours creates an incentive for people to travel, which undermines the lockdown and puts everyone at greater risk. It’s a difficult balancing act and The Trusts seem to be struggling with it more than other essential retailers.

The media quickly picked up on the The Trusts’ queuing issues

Where to from here

First, The Trusts need to address the issues at their retail stores. They’ve finally taken the positive step of halting sales of spirits and RTDs. Now they need to open more stores, extend the hours and shorten the queues. This isn’t beyond them. Hopefully, The Trusts will also look at click and collect again but execute in a way that doesn’t breach customer security and that utilises their existing stocks, available staff and unused stores.

The Trusts have the resources to help. Most of their business (i.e. retail) will weather the financial storm relatively unscathed. They have no debt, strong cashflows and don’t need to batten down the hatches to survive. Now is not the time for The Trusts to bargain-hunt investments, buy more properties or hoard cash.

Let’s hope that the community’s resources will be used to for genuine community purposes as the country recovers, and that we’ve seen the end of the empire building and PR-heavy stunts like the Million Dollar Mission that are more about branding than giving back.