There’s been a whole lot going on with the Te Atatu Tavern lately. As usual, information from The Trusts is scarce (with all the relevant business conducted in secrecy) but through some official information requests and other sources we can piece together a picture of what has been going on.

In September 2021, the Trusts publicly announced that it would be offered for sale. It was marketed by Colliers with a deadline for offers of 21 October 2021 but the listing remained active until well into 2022 (the listing was last seen in August 2022).

There have been no announcements from The Trusts about the sale following their initial statement when it was first put on the market. We now know that they did receive offers but no sale was completed and the property was subsequently withdrawn from the market (though the timing of that withdrawal is unclear). The details of the offers they received and the reasons for the sale not being completed were redacted from the documents we received.

The Tavern continued to trade until it was closed temporarily in April 2022, and shortly after that its permanent closure was announced (12 May 2022). The Trusts said the closure was necessary because of health and safety issues with the building.

Building reports indicate that the state of the building was indeed dire. The photos paint a grim picture. The building had deteriorated to an alarming extent and in early April, cesspits failed causing substantial internal flooding that required 12m³ of water to be pumped out of a coolroom. An electrician identified that the flooded coolroom was live (including a handrail) which the Trust described in an letter to DIA as “a major safety hazard as any person could be electrocuted”. 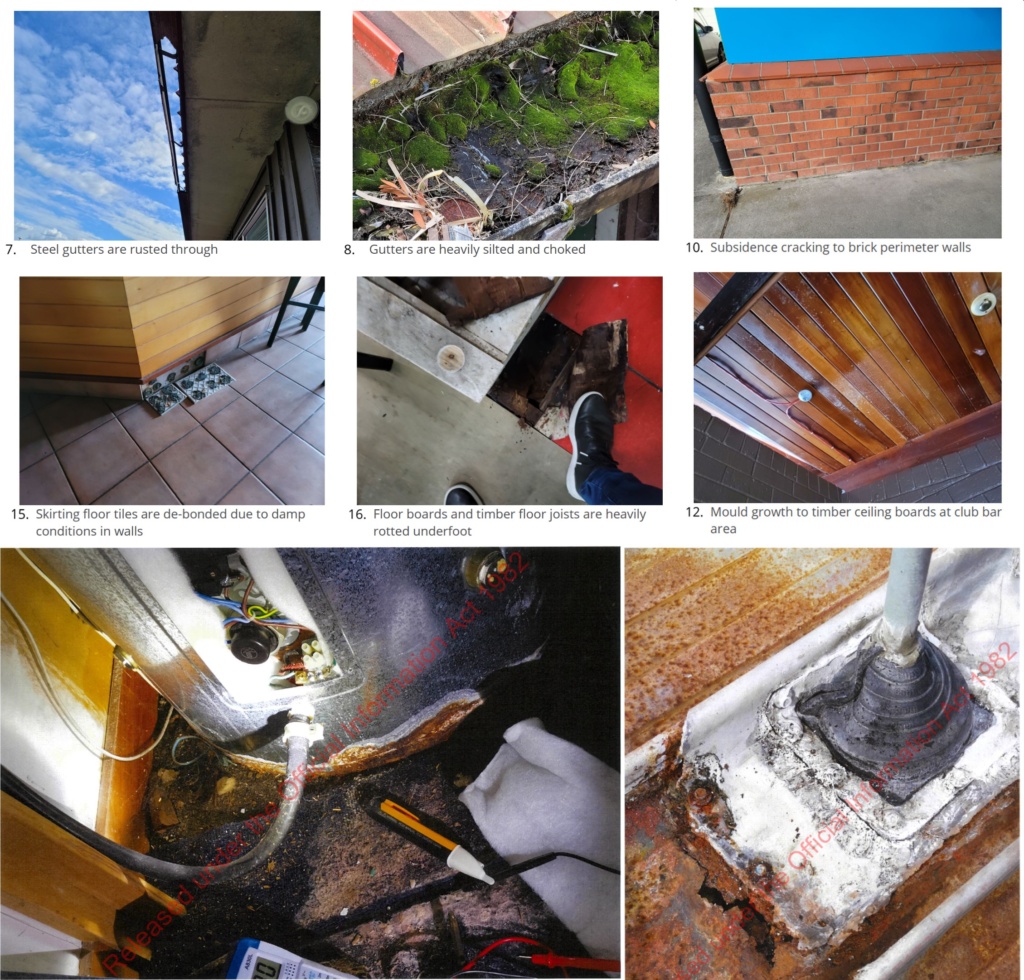 The Tavern building had obviously been neglected for a long time and we think is indicative of a wider problem at the Trusts with property management. A Governance Review from Dec 2020 was critical of their lack of maintenance planning and record-keeping (e.g. they kept no schedule of deferred maintenance).

Less than 6 months later, West Liquor Railside was also closed due to health and safety issue with the building. An email from the CEO to the WLT board dated 23 Sept 2022 lays bare the extent of the issues there:

As a result of multiple leaks in the roof and damp smells throughout the property management commissioned a biological assessment report of our Railside property. The report was received yesterday and highlighted a number of concerns throughout the building including:
• 17 roof leaks that presented health and safety concerns to our team, customers and building each time we had sufficient rainfall
• Widespread mould spores throughout the property, that present health risks to occupants if remediation action is not taken
• The risk of harm to the health of customers and contractors who are either immunocompromised or have underlying health conditions. The result being that it is not safe for them to enter the building and we must advise, as a legal requirement of our duty of care under the act.

During big rain events leading to further water ingress the heightened safety concern to our people, customers and contractors include:
• Ceiling collapse
• Electrical and fire hazard
• Slip hazards
• Any operation of machinery in the building (e.g. fork lift)

After meeting with the WATS property committee, management recommended immediate temporary closure of the business due to the multiple health and safety concerns that present. We are currently reviewing a number of options with urgency to re-open the business, but this will take time and we do have multiple barriers to overcome.

An email on that same day from the CEO to Linda Cooper (President of WLT) and Tim Livingstone (Chair of WATS Ltd) described the release of information to me as “not ideal” and that they would “continue to monitor” what I would publish. 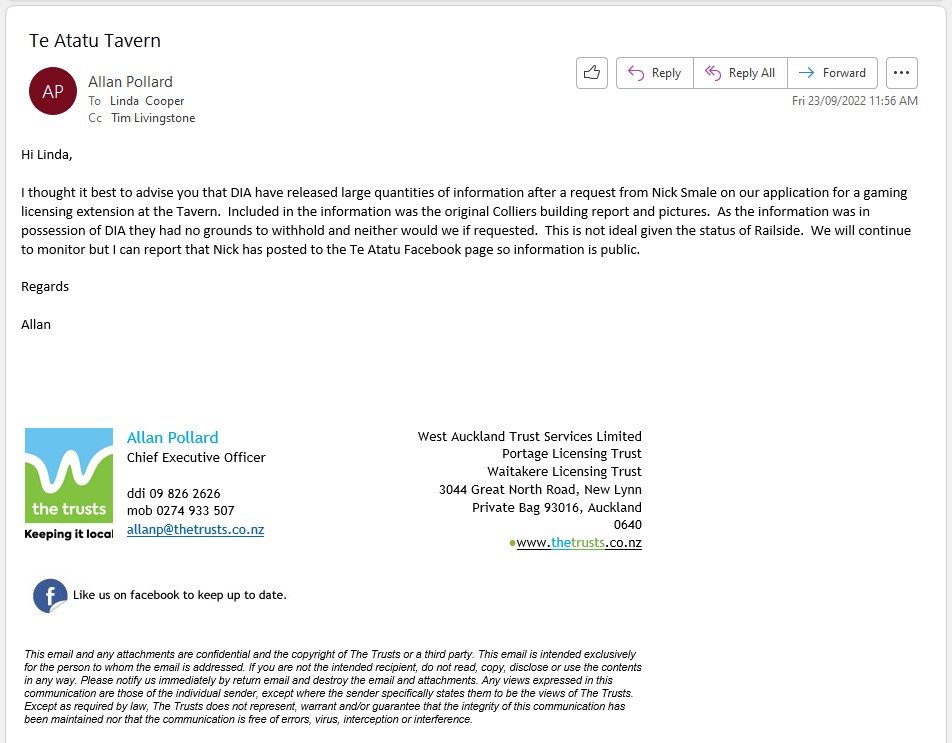 A new tavern on that site?

In July 2022 the Trust applied to renew their alcohol license for the Tavern. A strange move considering its permanently closure had already been announced. We sought information from a number of sources (including the Trust itself) to find out what was planned.

The acting CEO of The Trusts said no decisions had been made and license applications were simply to keep their options open.

Their alcohol license application was made on the basis that the existing venue would reopen but it also stated that they expected to deconstruct the building and rebuild an area to operate from. We were told that the Trust’s plan was to clear the site and use a temporary building as a tavern while they developed the site. They wanted a temporary alcohol license for that temporary tavern and they needed to renew their existing license so they could get that type of license when they needed it.

We found out too that they had applied to keep their class 4 gaming (pokie) license. The Tavern had hosted 18 gaming machines and gaming licenses must be surrendered if there’s no gambling at a venue for four weeks. The Department of Internal Affairs (DIA) has the power to grant extensions though and DIA confirmed that the Trust had made two applications for such extensions for the Tavern. The second application (for an indefinite extension) hadn’t yet been approved. Applications are almost certain to be declined without an active alcohol license in place, which explains why they couldn’t just let their alcohol license lapse and apply for a new alcohol license when their temporary tavern was ready.

In their application to keep their pokie license, it was communicated to DIA that WLT had given a “clear indication of their intention to redevelop the existing site at 3 Pringle Road, Te Atatu Peninsula. This would involve the demolition of the Te Atatu Tavern to be replaced by a new tavern along with a commercial precinct and residential development”. This wasn’t communicated to DIA as an ‘option’, but as a firm intention.

So the Trust wanted to keep open the option of a tavern with pokies on that site. And you can see why pokies were so important to them. The Tavern’s gaming machines generated about $1.2 million in proceeds each year. That compares with an annual turnover for the Tavern itself of $570K, and earnings of $75K. The $1.2 million goes to TTCF (not the Trust itself) but the Trust does get a chunk of it (venue payments) and effectively controls another chunk of it (pokie grants). It means that:

The decision to demolish

In May 2022, management recommended to the WLT board that the Tavern building be demolished, which was approved behind closed doors. The agenda for May 2022 simply lists a decision to be made during the public excluded session entitled “3 Pringle Road, Te Atatu Peninsula”.

Then in early August 2022, an urgent decision was made between meetings by the WLT board to appoint a contractor to “deconstruct” (i.e. demolish) the building. Again, this was done in secret. Only one proposal was sought / received (from Trow Group Ltd).

On 29 September 2022, four months after the decision to demolish was made, The Trusts publicly announced that the Tavern building would be deconstructed.

Demolition work visibly began on the site on October 25th with temporary fencing erected and all of the trees around the building felled, including four substantial kauri planted in the mid-1970’s. There was a strong reaction locally to the loss of these trees and questions were asked whether they needed to be felled. 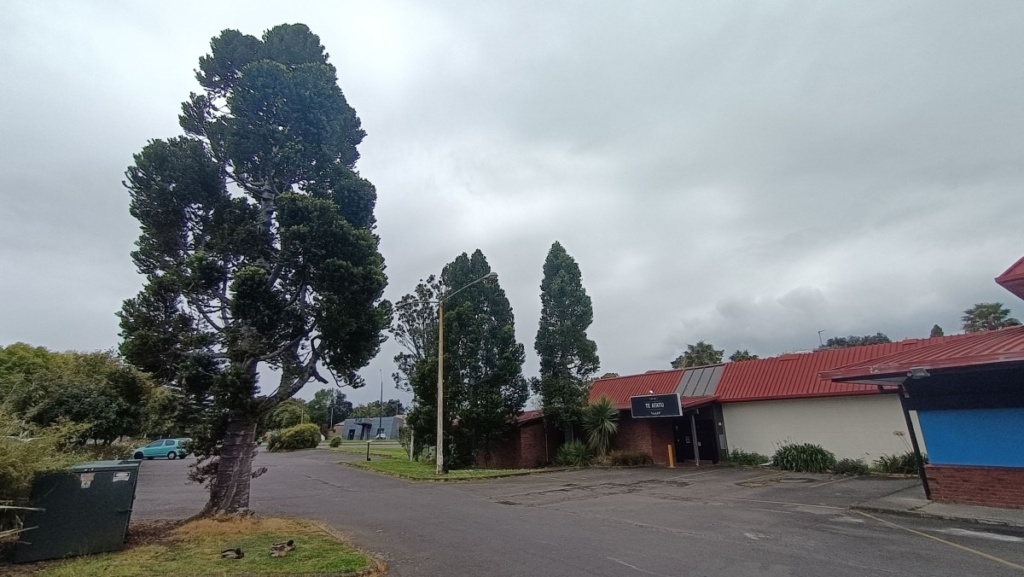 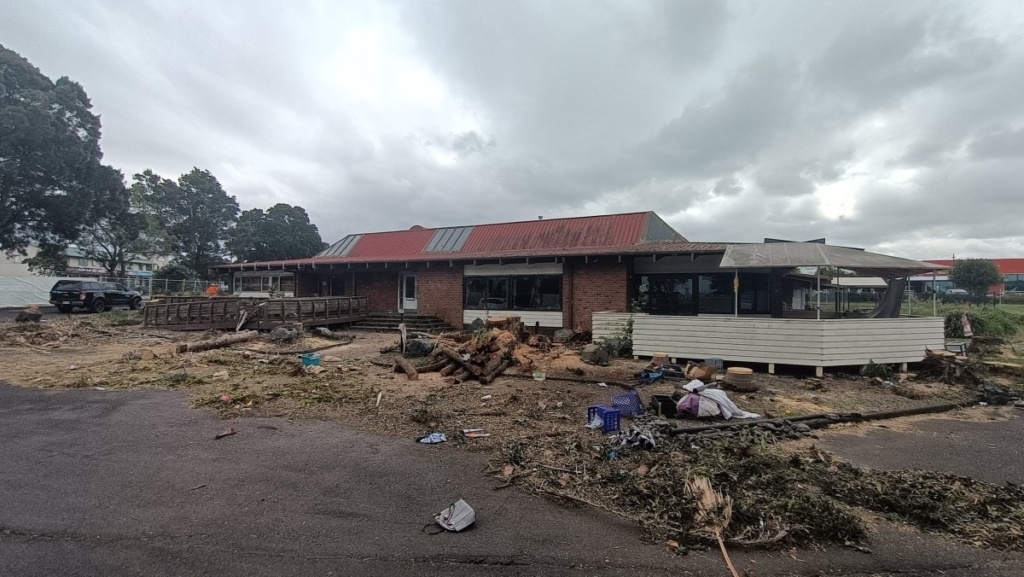 No comment has been made by the Trust directly, but Brooke Loader (elected member for WLT Te Atatu) commented on Facebook:

“It is my personal view that beautiful rākau like this need to be retained for our future generations, so when I was first alerted to this by Kevin Palmer I raised this immediately with The Trusts CEO Allan Pollard and sought answers about what was happening.
I have been advised that there was one protected Kauri tree on the property and that sits outside of the deconstruction zone. The contractor was required to ensure this tree is protected. In addition, trees around the perimeter of the site are not to be affected, I was also advised that on health and safety grounds the trees needed to be removed as they were a hazard that compromised the safety of the contractors, and further to this the building has a significant amount of asbestos and the site had to be scrapped and cleaned, including trees removed to make it safe for our community.”

We haven’t seen the correspondence between Brooke and The Trusts CEO, but it appears the Trust is using health & safety as their justification for removing the trees.

The asbestos survey of the site does indicate quite a bit of asbestos present, but it’s all rated as “low” or “very-low” risk. And a 150mm scrape of the building footprint is recommended because there is some fibre-cement debris in the subfloor (risk rating “low”). There is no mention of any requirement for the scrape to extend beyond the building’s footprint. And there is no mention in the asbestos survey / report of the trees adjacent the building, and no recommendation for trees to be removed.

I ran into Joe Vagana (Partner, Operations Manager and head of Health & Safety at Trow Group – and also Kiwis, Warriors and a general Te Atatu legend!) at the site on the day the trees were felled. He expressed surprise that all the trees had been felled including the kauri. It seems unlikely that their felling was a health & safety requirement that had come from Trow.

Who approved the felling of these trees? The WLT board approved the removal of the trees in August 2022. At that time Te Atatu’s representatives were Penny Hulse and Brooke Loader. The deconstruction proposal (which they approved behind closed doors) clearly stated that all the trees and vegetation would be removed within the deconstruction area (see image below marked as Figure 2). 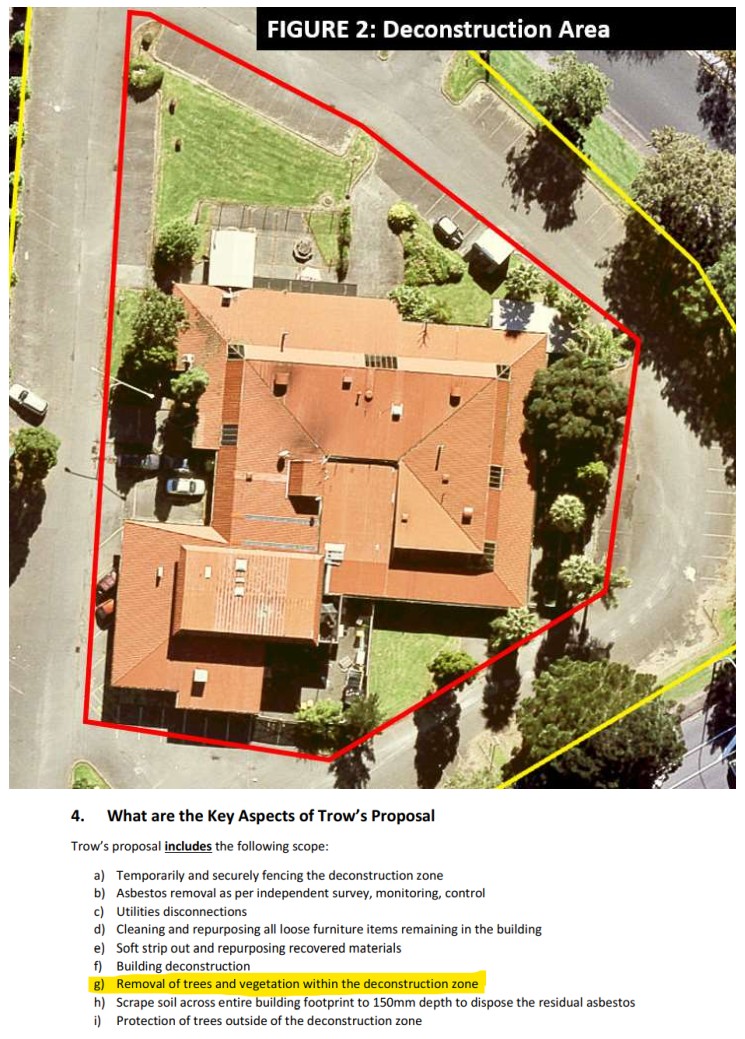 Why did they approve felling the trees? We can only speculate because discussions were had behind closed doors and no information was released to us. We don’t even know if the board discussed the issue of the trees or whether it just passed unnoticed (unnoticed seems most likely given Brooke’s Facebook comment). Taking a cynical view, management may have wanted to clear the site to enable development and/or make it more desirable to prospective purchasers, and they could have pushed an urgent decision behind closed doors past the board without anyone noticing what it meant.

On 26 October 2022, management recommended to the WLT board to re-commence the sale process for 3 Pringle Road. Presumably, that recommendation was approved and the site is now back on the market.

The decision paper has important details redacted but is still full of interesting information.

There’ll be a range of views about the the demolition (including the tree felling) and a renewed attempt to sell the Tavern site, so putting that aside what’s the beef here?

There are three main failings of the Trust:

The documents released which have informed this article are available here