February has been a busy month for The Trusts. Free first aid kits for every household. The Million Dollar Mission finalists have just been announced and voting will open in March. Are we at peak ‘giving back’?

Don’t get me wrong. Giving back is definitely a good thing – but could it be better? And in particular, how much of the Trusts’ programme of giving back is actually philanthropic, and how much of it is self-promotion?

Let’s take a critical look at the different parts of the giving back programme.

This year West Auckland is getting 70,000 first aid kits at a reported cost to the community of $680,000. We don’t know how much they’re spending on distribution and advertising (we requested details last year but they refused to provide any information), but we can guesstimate the total cost is ballpark $800,000. That’s a decent step up from previous distributions.

Household distributions are a really interesting beast. Despite the low value of the items being distributed (between $5 and $10 per household), they seem to 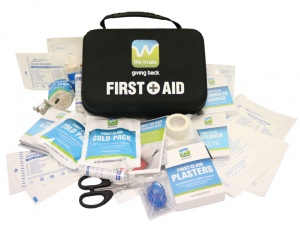 Just a little bit of branding there

generate positive feeling towards The Trusts amongst a good chunk of the public. The fire extinguishers distributed ahead of the 2003 referendum were reportedly a major factor in the result. Some people see them as a blatant bribe of course, but it seems lots of people don’t think too hard about it and really like getting free stuff.

“It was the personal gifts to householders that the interviews and the focus groups highlighted as creating the most positive impression.” (Bernard Teahan – A Great Social Experiment)

I don’t think you could reasonably argue that these distributions actually deliver much public good. Most households are perfectly capable of purchasing a new first aid kit should they need or want one. There are some households that may not have the means to buy their own, but for those households I suspect that a first aid kit isn’t the most important thing they need.

Having first aid kits, smoke detectors and fire extinguishers available in households is a good thing. Giving them away is probably not a particularly good use of community money but the outcome is desirable nonetheless. So what about providing these items at cost in West Liquor stores all year round? No billboards required. Just setup a display in each store and sell the first aid kits for $10 each etc. They could even discount them to half price (or even make them free) for people holding a community services card. That’d achieve at least the same level of public good, for a tiny fraction of the cost.

Sponsorships are certainly not 100% about giving back. Most sponsors are private businesses that enter into sponsorships to get their brand in front of people in a positive way through their association with whatever they’re sponsoring. Think QBE stadium in Albany, EcoLight stadium in Pukekohe, FMG stadium in Hamilton or Yarrow’s stadium in New Plymouth. Or you can think about AIG sponsoring the All Blacks or Woodstock Bourbon sponsoring the Warriors. Sponsorship arrangements are mutually beneficial – they are not a ‘no-strings attached’ donation.

The Trusts certainly get good bang for their buck with their sponsorships. We don’t have a breakdown of the value of each sponsorship (that would be commercially sensitive) but simply inspecting the list of what they sponsor and their overall spend is enough. It appears that their naming-rights sponsorship of The Trusts stadium probably costs less than $100,000 per year. With the number of events held at the stadium each year – the public see and hear about The Trusts quite a lot. Couple that with the widely held misconception that The Trusts are responsible for building the stadium and that has to be the best $100,000 of marketing spend anywhere in Auckland right now!

If The Trusts simply wanted to support these organisations/events, they could provide donations instead of sponsorships. That would allow Waitakere Stadium, Spooks & Sparks, Northern Mystics etc to seek private sector sponsors and bank both cheques.

There are some really great things about the Million Dollar Mission. The groups that have received funding are making a significant contribution to improving our community and absolutely deserve our gratitude and support. And a million dollars is a big chunk of money. You could also argue that there’s also a good level of transparency with the public voting system – the funding decisions aren’t made by the same old politicians behind closed doors.

There are some elements which I don’t like though.

The selection panel comprises four elected members and up to three invited public figures. Public figures include Sir Bob Harvey (former politician), Linda Vagana (former Silver Fern), Dai Henwood (TV presenter / comedian) and Duncan Garner (TV presenter / journalist). This panel selects the finalists from the applicants (in 2018, 32 finalists were selected from 145 applicants). The selection criteria are not made public, nor are the lists of applicants or the amounts that the organisations have actually applied for.

The use of celebrities is a good way to increase media coverage of the Million Dollar Mission. For example, this year Duncan Garner has already spoken about his involvement in the selection panel on breakfast TV more than once. So it’s great for publicity, but I’m not so sure that its great for making the right decisions about where funds should be distributed.

For those organisations which make the list of finalists, the amount they actually receive depends on a public voting process. This process also appears to be designed to generate maximum public awareness and engagement. Each vote is worth $5 and the public can vote once a day until the funds are all allocated. I have several issues with this process:

My final criticism is the amount of money that The Trusts spend on marketing for the Million Dollar Mission. The spend in 2017 was reportedly $200,000. That’s a lot of money that could have been distributed to applicants that missed out.

I’d like to see The Trusts abandon the Million Dollar Mission in favour of more traditional charitable grants. Key elements would be:

The Trusts announced this $2m donation in November last year to upgrade Waitakere Hospital’s SCBU (for premature babies). This is the first time that they have made a donation of this scale since TTCF started distributing the pokie money in the mid-2000’s.

John Tamihere might have questioned why the DHB wasn’t funding the upgrade – but that is not a criticism of The Trusts. If the upgrade is required and the funds are not available from the DHB, I think we can be grateful that The Trusts and the other major donor (Douglas Pharmaceutical) have stepped up to make it happen.

I do find myself wondering though if The Trusts would have been so quick to offer funds if the need was for a unit that had less emotional appeal. For example, if it were the geriatric unit requiring an upgrade would The Trusts (or Douglas Pharmaceuticals) have been willing to make a similar donation? I suspect that if someone wrote a list of top 10 Public Relations opportunities, that building a hospital for sick babies would be pretty high up on that list.

They could do these big donations more often. And for causes which don’t provide such good PR material.

Would competition make this better? Probably. If The Trusts no longer had a monopoly at risk, their own public image would become relatively unimportant and there’d be no need for all the marketing or giveaways. There’s no guarantee that they would cut back on the PR but they wouldn’t have anything at risk any more, so what would be the point? Competition should mean that The Trusts have more to give back and they could do the giving back better.