Looking back at the 2019 elections

With the election now a few months behind us, and a parliamentary inquiry submission due soon, I’ve been looking in more detail at what happened in last year’s licensing trust elections.

Overall, the reported turnout for Auckland’s local body election was 35%. But not everyone who returned their voting papers filled out the licensing trust part. Taking that into account means the licensing trust turnout was 26%. On top of that, about 15% of eligible Aucklanders aren’t even enrolled to vote (mostly young people) – which further drops the turnout to a measly 22%.

We had six candidates standing with Ben Goodale and Andrew Flanagan elected.

Although we would have liked to win more seats on the boards, the results were still pretty good. Those of us that missed out got pretty damn close, missing out by relatively narrow margins (between 111 and 566 votes).

Putting together the turnout figures with the voting results allows us to estimate how people voted. Te Atatu was the simplest ward, with two WALTAG candidates (Amanda and Nick) up against two status-quo candidates (Penny and Brooke). The graph shows approximately how the people of Te Atatu voted (or didn’t vote for the most part actually). 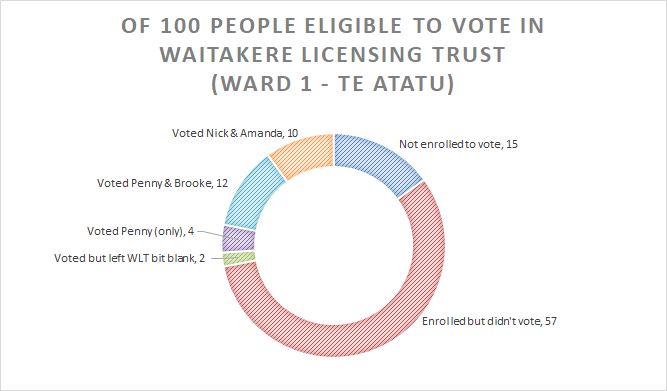 Considering Penny’s public profile after 27 years in local government, and the Labour Party resources supporting Brooke’s campaign (and Penny’s endorsement), we got remarkably close to winning a seat in Te Atatu. If the status-quo vote had been split (e.g. if the Labour party had run two candidates instead of just one), we could well have nabbed one of the seats. 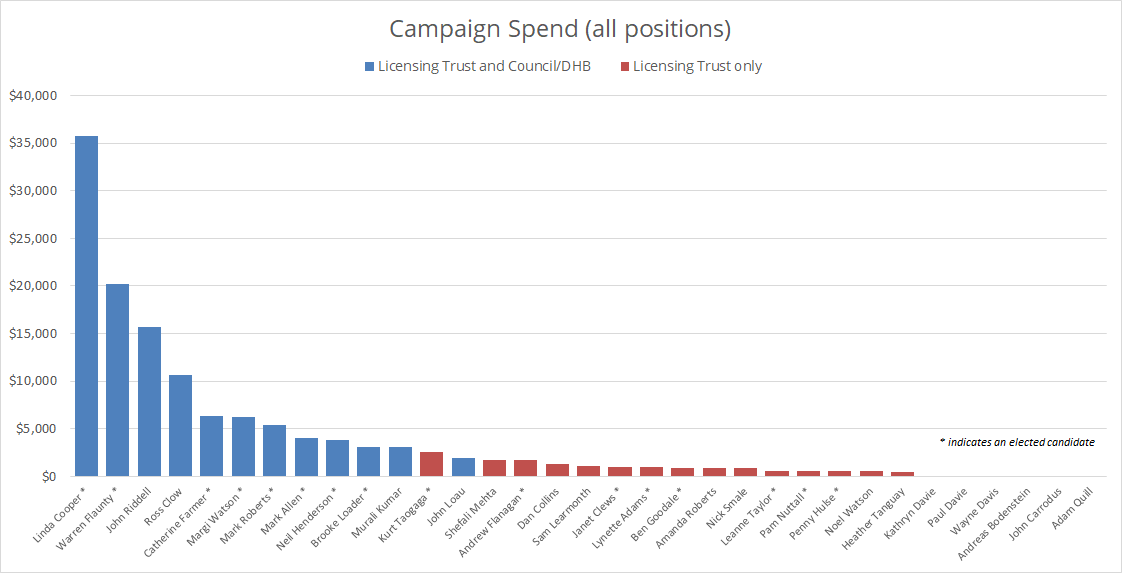 Linda Cooper spent a lot more than anyone else on her campaign followed by Warren Flaunty (who stood for the trifecta of DHB, Local Board and Licensing Trust). Linda also spent a lot more than her rivals for Council’s Waitakere Ward (Shane Henderson and Greg Presland each spent about $19,000). It was a good investment for Linda as her Council position and Licensing Trust presidency will earn her almost $500,000 over the three year term.

Donations over $1,500 need to be declared in local body elections and there were very few donations declared by licensing trust candidates.

The only donations of note were made to Linda Cooper (and Shane Henderson too) for $5,000 from Mark Gunton who is the owner of the NZ Retail Property Group. NZRPG is the developer and owner of Westgate. Linda also received an identical $5,000 donation in 2016.

The donations were declared as required but it’s questionable whether council candidates should be accepting donations from property developers. A quick google search on Mark Gunton throws up quite a few more questions about the appropriateness of the donations.

Frustrated Mark Gunton sues council over Westgate, claiming contract breaches, no bus station
Litigation has begun between Mark Gunton’s Westgate and the Auckland Council but two prominent councillors are backing the businessman, saying they are frustrated about lack of a new bus interchange at the $2 billion northwestern town centre. NZ Herald

So in a stoush between Council and a property developer, Linda is publicly backing the developer. A developer that Linda has accepted donations from. Hmmm.

In the context of these donations, it is also relevant to question the appointment of Campbell Barbour (General Manager – NZRPG) to the board of The Trusts’ joint venture (WATS Ltd). Has Mr Barbour or Mr Gunton unduly influenced the decisions of The Trusts to favour NZRPG? It is notable that the NZRPG shopping centre (Westgate) has both a retail liquor store (West Liquor) and a venue (Miss Q’s); whereas The Trusts have chosen not to situate anything at the NorthWest shopping centre which is owned by Stride Property.

Unfortunately, we’ll probably never know more than this. It’s more or less impossible to investigate as all such discussions are held behind closed doors, meeting minutes are not available to the public and elected members are forbidden from discussing anything that takes place in the closed session of meetings.

And whilst Mark Gunton’s personal pursuits aren’t really relevant to the operating of the licensing trusts, the following article from a few years back doesn’t paint a pretty picture. Particularly for a progressive, ambitious politician like Shane Henderson. I wonder if Shane did a quick google search on his donor before accepting the donation.

The beast’s tusks are blood-spattered and its face contorted into a gruesome death mask.

Another shows Gunton crouching over the body of a Nile crocodile.

Pools of blood lie around its fearsome jaws, which are held open by a length of wood. NZ Herald 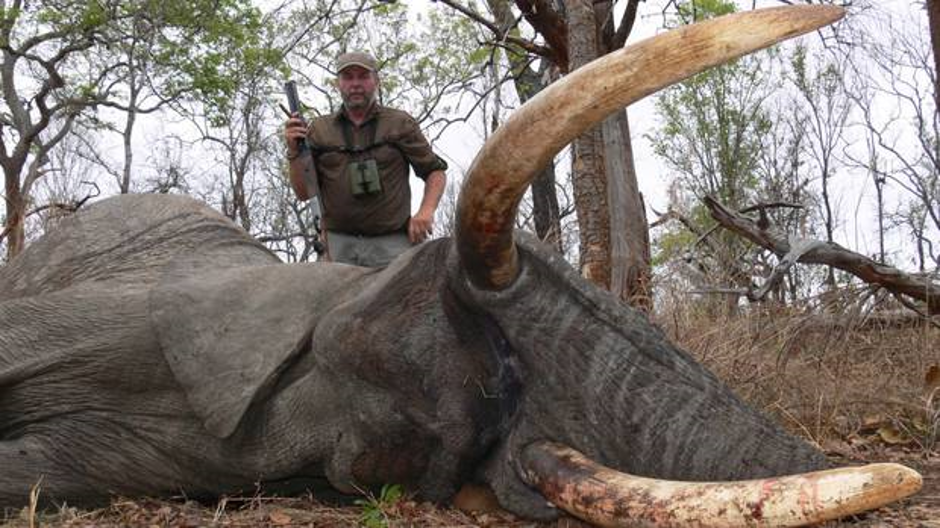 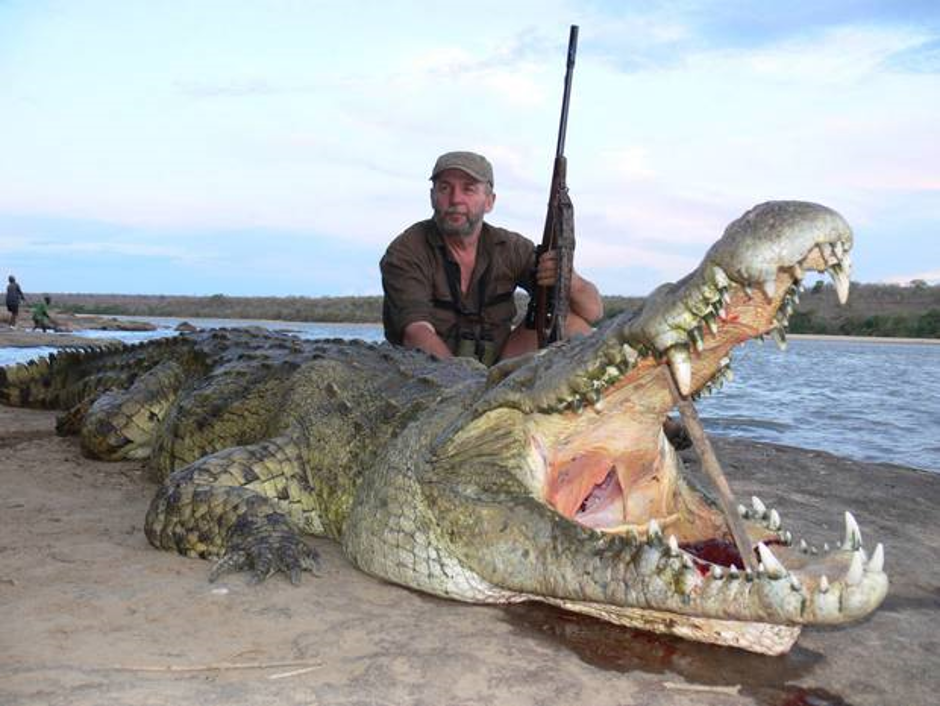