Nothing to see here

Since the campaign for competition kicked off, I’ve made three official information requests to The Trusts. The full set of correspondence is here.

Licensing trusts are bound by the local government official information and meetings act (LGOIMA). LGOIMA basically says that when a member of the public requests information, licensing trusts have an obligation to disclose that information unless there is a valid reason not to. There are quite a few valid reasons for refusing a request including privacy, commercial sensitivity etc. Licensing trusts generally need to respond to a request within 20 working days. They’re also allowed to charge reasonable costs for preparing the information. If a requestor isn’t satisfied with the response, they can make a complaint to the Ombudsman.

So far, the whole process hasn’t been very fruitful – we’ve learned sweet FA that we didn’t already know. The Office of the Ombudsman has only just (finally) assigned an investigator more than 8 months after my first complaint.

So while we haven’t yet learned much about The Trusts’ operations, there’s definitely still some interesting stuff in there. Here’s a taste:

The Trusts appear to be employing a strategy to avoid or delay answering questions. Here’s what it looks like:

Unfortunately for us, so far it seems to be working. I am hopeful that it is a temporary reprieve for The Trusts, and that the Ombudsman’s investigation will resolve these issues. Fingers crossed.

The Trusts’ responses are littered with misinterpretations. Quite a few refer to their financial statements – which don’t provide the information requested. And some of their responses are very difficult to believe. Here are some examples.

Real estate owned by The Trusts

I requested a list of property owned by The Trusts.  I also requested information about which properties were tenanted and how much rents were received.

In response, The Trusts offered to provide copies of registered titles at a cost of $15 per property. No information regarding tenancies or rents was disclosed.

Having clarified that copies of the title documents were unnecessary and a list of addresses was sufficient (29 Aug 2018), The Trusts have not provided any further response.

I asked for financial statements for WATS Ltd and a description of the assets/liabilities. They didn’t directly respond to my request for the financial statements. They did however categorically state that “WATS does not have any assets or liabilities”. That statement is directly contradicted by the summary balance sheet (which is publicly available) – which shows WATS has about $12 million in assets and liabilities. Having pointed this out to them on 11 June 2018, The Trusts have chosen not to provide any further response.

In August 2018 I requested information about the upcoming ‘household distribution’ (i.e. the first aid kits). Basically, I asked how much were they planning to spend on the kits and also how much on marketing/distribution. Their response:

This information is not yet in existence for the upcoming distribution. Once it is created, then it will be made available through the provision of annual financial reports (2nd Nov 2018)

Uh-huh. No budget for it in November but it was executed in February. Sure.

I requested details about The Trusts’ managed fund investments – basically which fund(s) are they invested in and how much in each. They declined on the basis of commercial sensitivity.

Despite their stonewalling, I think we can assume that their investments are made with this crowd: Trust Management. The Trusts referred to them in this Western Leader interview back in 2016. One of their General Managers (Patrick O’Reilly) also attended a recent board meeting for the Waitakere Licensing Trust.

I’m not sure why they’re sensitive about this information, it’s hardly controversial. Perhaps they’re worried about how the public feel about investing through an organisation associated with the Anglican Church. Personally, I’m a little uncomfortable with the mixing of religion and politics but this seems harmless enough.

In the Trusts’ response to my second information request, Simon Wickham took the opportunity to set me straight on a few things. It is a truly bizarre letter. I subsequently met with Simon to discuss it. It was a disappointing, albeit illuminating experience. Suffice to say it is unlikely I’ll be invited to end of month drinks at Trusts HQ any time soon.

This paragraph is the most bizarre of all. The Trusts are the only ones who can operate a drinks led venue in West Auckland (a bar with a tavern or hotel on-license). They should have a pretty good grasp of what that means. And yet, Simon writes this: 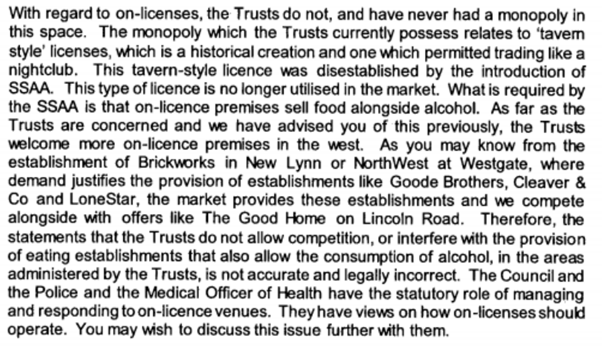 It’s complete and utter nonsense. The Sale and Supply of Alcohol Act 2012 (SSAA) replaced the Sale of Liquor Act 1989 (SOLA). The definition of a tavern didn’t really change:

tavern (SSAA 2012)
(a) means premises used or intended to be used in the course of business principally for providing alcohol and other refreshments to the public; but
(b) does not include an airport bar

tavern (SOLA 1989)
means any premises used or intended to be used in the course of business principally for the provision to the public of liquor and other refreshments; but does not include an airport bar

And here’s an explanation of the difference between a tavern on-license and a restaurant on-license (and yes – this explanation has been checked with the team at Auckland Council).

If you believe his statement was made in good faith then Simon Wickham has a fundamental misunderstanding of the environment in which The Trusts operates. Perhaps that partially explains why their hospitality business continues to struggle. Or perhaps his letter wasn’t written in good faith. Decide for yourself.

Attacking the man, not the ball

Some of my requests have been refused on the grounds that the information will be used for “improper gain or advantage”. Here’s an example.

And this is what the Ombudsman has to say about what improper means in this context:

In this regard, the word “improper” is defined in the Concise Oxford Dictionary as meaning, “…not in accordance with accepted rules of behaviour, inaccurate, wrong….” The word “improper” has also been held by the courts to import an element of illegality or moral turpitude.

It appears that LGOIMA is a bit toothless and relies on public agencies doing the right thing. I’ve got no problem with them withholding information where there is a genuine reason such as commercial sensitivity or privacy. But our licensing trusts aren’t doing the right thing. And whilst they have a reputation for this sort of thing, and demonstrated similar behaviour in defending themselves against our Advertising Standards complaint, I can’t help but be surprised at their shameless stonewalling.

The Auditor-General has commented that “licensing trusts are probably the least scrutinised part of the public sector”. If our licensing trusts dodge meaningful public scrutiny in this way – there is effectively no public accountability at all. We’ll wait and see if the Ombudsman sorts out this mess, or if The Trusts manage to wriggle their way out again.