Who Should We Trust?

Simon Wickham is the public face of The Trusts. We rarely (perhaps never) see the elected members speaking publicly about The Trusts. Whilst Simon was not publicly elected, he has been appointed by our elected representatives and they have given him the role of spokesperson on behalf of their Licensing Trusts.

Simon’s prominent role is in contrast to most other public organisations. Phil Goff is the face of Auckland Council much more than the CEO Stephen Town. Similarly in central government, it is the Ministers and not the chief executives which front the media. So why does Simon play such a prominent role? The simple answer is the joint venture structure. Neither Linda Cooper (Waitakere) nor Ross Clow (Portage) is in a position to speak on behalf of the overall organisation. Multiple spokespeople would likely cause problems with mixed messages and contradictions. Simon is best placed to act as spokesperson and we can expect him to continue to be the face of The Trusts during any campaign.

So what level of faith can we place in Simon’s statements? Let’s take a look at Simon’s interview on the Project which aired 27th April 2018. 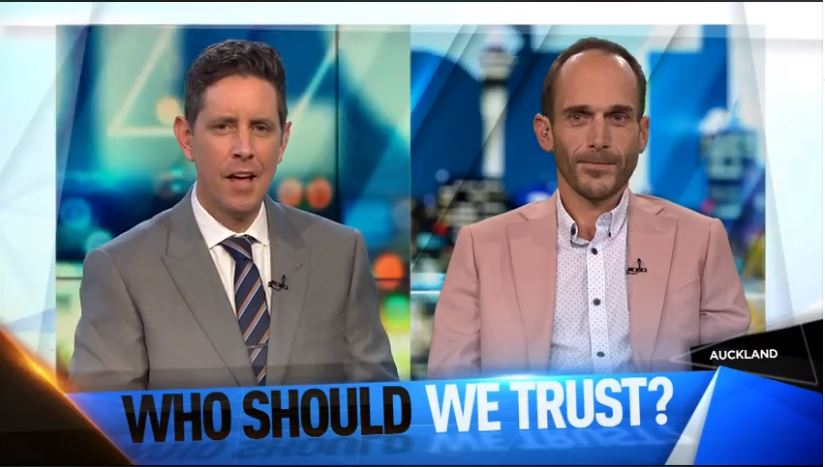 Kanoa Lloyd: How much is sitting in your bank account that could be going back into the community?

Simon Wickham: Right now there’s about $14M sitting in our bank account and that’s because we’ve just sold a property of ours. But we’ve got a mix of retail, hospitality and investment businesses, all of those need some cash injection, some of that money goes to giving back every year and just like good people that put away savings for the future, we’re doing the same. We’ve got a bunch of that sitting in good investments, that we believe that we’ll be able to give back more in future in fact this year we’re hoping to lift the give back to $2M and we want to have it at $5M in 5 years time.

It is almost certainly accurate that The Trusts had a combined bank balance of about $14M at the time of the interview. Later this year, when the financials for 2017/18 are released, we will be able to see the balance at 31/03/2018 but I would be very surprised if it were much different to the $14M figure quoted.

But is it “because we’ve just sold a property of ours”?  Does “some of that money goes to giving back every year”?  And do they have “a bunch of that sitting in good investments”?  Let’s look at these statements:

Looking at the published financials, we can see the bank balance and value of investments on 31st March each year.

So, is the $14M bank balance “because we’ve just sold a property of ours”? Well, a year ago it was $14M and a year before that it was close to $16M. So technically yes, without the sale it would have been about $12.5M. But in reality, no – it isn’t because they’ve just sold a property, it’s because they choose to hold that much cash (and are building an investment asset portfolio).

Simon’s statement implies that the $14M is a total figure, which includes The Trusts bank balance as well as the value of their investments. The 2017/18 financials will make this clear, but until they are published we can look at the historical data above.  It appears very unlikely that the combined balance will be as low as $14M (unless a significant unannounced capital investment has been made).

To be clear, I don’t think that Simon is intentionally telling lies. But I do think the answers he has given in the interview were misleading. Perhaps it is a case of getting nervous in front of the camera or losing focus on the question that was asked. The question posed was about their cash in the bank, and his response meandered into other messages he wanted to deliver.

From what I can tell, Simon appears to be a capable chief executive. The financial performance of The Trusts has improved during his term and many of the strategic decisions appear sound. My experiences to date though would indicate that clear, open communication with the public may not be his greatest strength. If, as we expect, our elected members continue to place their faith in Simon as their spokesperson, we will continue to fact-check his statements.