Are The Trusts actually profitable?

Fundamental to the argument for keeping the monopoly in West Auckland is that the profits from selling alcohol are returned to the community. So one of the first questions we need to address is: “Are ‘The Trusts’ actually profitable?”

In short, yes. But is their core business (their bottle stores, bars and a hotel) profitable? That depends, and I would argue that they are not – at least not without their gaming machine revenues.

In the last 5 years (2012/13 to 2016/17) The Trusts recorded profits before tax of $5.1M per year on average. If we take out incomes from their investments and the rents they receive from the poker machine operator (TTCF Ltd), this figure reduces to a $0.32M per year loss. So without the pokies, the Trusts core business has been making a loss! 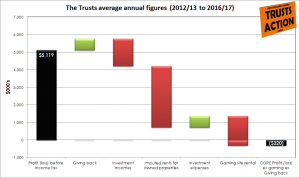 “Bullshit” I hear from the other side of the room. Well, there are a few assumptions that underpin this analysis, so for those who are interested the details are at the end of this post.

So, how on earth are they not making a profit?  Economic theory would suggest that a monopoly operator should be persistently making “super-normal” profits; that is, profits greater than those that can be sustainably achieved in a competitive market. But The Trusts booze business is struggling to break even. Why is that?

There are a few possible reasons:

How much of this is in the control of The Trusts?  Not much. Their monopoly will most likely be eroded further by online retailers. While they hold their monopoly they are unable to operate outside the district, so they can’t grow to an effective scale. They could drive for efficiency but without owners / shareholders breathing fire from one direction, and competitors pushing hard from another direction, any gains are unlikely to be sustained.  And whilst they could scale back their PR spend, as long as they believe the monopoly is in the community’s best interest, it is unlikely they would take this step.

The Trusts want us to believe that introducing competition would undermine their ability to give back, but their profits come from their investments which would be completely unaffected by competition. So actually, what would losing the monopoly put at risk?  Perhaps just an over-sized support office.

What do you think?  Are there other reasons The Trusts aren’t making ‘super-profits’?

Details of our analysis:

First, let us consider The Trusts as two separate businesses: the first we shall call ‘The Core Trusts’ and the second ‘The Landlord/Investor Trusts’.

We have split the income and expenses of The Trusts between these two businesses and also estimated the rents that The Core Trusts would pay to The Landlord/Investor Trusts (i.e. the imputed rents). This analysis gives us a breakdown of the $5.12M published profit as:

But surely it just depends on how you split it up? And indeed that’s true. Here is exactly how we made the splits:

The Trusts financial statements provide us with figures for the following: Rental income, Interest income, Dividends income, Revaluation of investment property, Gain/(loss) on sale of investment property. These revenues we assigned to The Landlord/Investor Trusts. The statements also provide a figure for “Other income” which is not explained further – we have assumed half of this “Other income” is attributable to The Landlord/Investor Trusts ($183K). All other income is assigned to The Core Trusts.

We also need to add back in the Giving Back activities of The Trusts which are buried in their income statements under headings such as ‘Administration costs’.  The Trusts have provided us with details of their giving back since 2013/14, and we’ve calculated the average give back over the last 5 years as $0.64M per year.

The imputed rents have been calculated as $3.49M per year. This is an estimate of how much The Core Trusts would have paid for leasing the 17 outlets/venues, head office and warehouse which they own and occupy. This was calculated as follows:

All expenses were assigned to The Core Trusts with the exception of ‘Depreciation of freehold buildings’ plus an allowance of $204K to manage the commercial properties (5% of the total rents).

With this calculation, the total rents received are $4.08M which gives a gross yield of 5.9% (total portfolio value = $69.2M using the 2017 Auckland Council valuations).

Alternatively, the imputed rents could be estimated using an opportunity cost approach. A conservative 6.5% gross yield gives an imputed rent value of $4.5M and an annual loss of $1.23M. The table below shows the profit figures using the two approaches.